Kiribayama Tetsuo - 霧馬山 鐵雄 (born April 24, 1996) is a Mongolian professional sumo wrestler from Ulaanbaatar. He made his debut in March 2015 and currently wrestles for Michinoku stable. He reached the makuuchi division in January 2020 and has one special prize. His highest rank as of 2022 is komusubi.

His father was a sheep-raising nomad in Dornod Province. From a young age, he rode horses to help his father at work, which strengthened his legs and waist – an advantage for sumo wrestling.

In 2014, he was invited by an acquaintance along with four other Mongolians to Japan to try out sumo at Michinoku stable. He had judo experience but not sumo experience. At that time, he was over 180 cm tall, but weighed less than 70 kg. The Michinoku stablemaster, ex-ozeki Kirishima, thought Byambachuluun was the best of the five, but was reluctant at first to take on a foreign recruit. The stable had not had a foreigner since Hakuba was forced to retire over match-fixing allegations in 2011. He eventually relented after Byambachuluun committed to staying in Japan, and let him take the new recruits examination in February 2015. After satisfying visa requirements, he made his dohyo debut in May 2015. Despite his lack of sumo experience he looked good in sumo school against future top division wrestlers such as Ura and Hokutofuji.

Byambachuluun made his professional debut in the March 2015 tournament under the shikona, or ring name, Kiribayama. He rose through the first three divisions rather quickly and only spent one tournament one in jonokuchi, jonidan and sandanme (he also won the sandanme yusho after a perfect 7-0 record).

Kiribayama made his makushita debut in January 2016, and produced his first make-koshi, or losing record. This demoted him back down to sandanme where he would spend two more tournaments. In May 2016, Kiribayama suffered a serious knee injury where he partially ruptured his medial collateral ligament on his left knee during training. He would sit out of his first tournament back in makushita and was demoted back down to sandanme. He would return to makushita the following tournament and became a makushita mainstay for a round three years. In September 2017, Kiribayama had to miss out on the tournament after an operation on his left hand. In May 2018, Kiribayama took the makushita championship after a perfect 7-0 record. He was promoted to a career high makushita 3 and faced off against juryo-ranked wrestlers. He faced off against two juryo ranked wrestlers and defeated Wakatakakage. He finished the tournament with a 3-4 record, but three tournaments later produced a 4-3 record at the rank of makushita 1. This guaranteed him a promotion to juryo.

Kiribayama was the first new sekitori Michinoku stable had produced since Kirinowaka in January 2008. He moved through the juryo division in just five tournaments. His fellow Mongolian, yokozuna Kakuryu, became his stablemate in October 2019 when Izutsu stable closed. After three tournaments in Juryo, Kiribayama took part in a four-way playoff for the juryo championship or yusho in November 2019, his 11–4 record securing his promotion.

In his debut top makuuchi division tournament in January 2020 he won the Fighting Spirit Prize with an 11–4 record. In March he stood at only four wins against six losses after Day 10, but won his last five matches to secure a 9–6 record and promotion to his highest rank to date of maegashira 3 for the next tournament, which was originally scheduled for May but actually took place in July. He withdrew on Day 10 of the September 2020 tournament with a shoulder injury, but returned from Day 13 to secure a winning record of 9–4–2. He was promoted to komusubi in November 2021, but finished with a 6-9 record. He returned to komusubi in May 2022 after finishing with a 10-5 record in the previous March tournament.

Before Kakuryu moved into his stable, Kiribayama still didn't competley adapt to Japanese culture. Kakuryu helped him quite a bit, such as overcoming his dislike for natto.

According to his Japan Sumo Association profile, Kiribayama's preferred grip on his opponent's mawashi is hidari-yotsu, a right arm outside and left hand inside position. His favourite techniques are listed as yori-kiri (force out) and nage (throws), both underarm and overarm. In the run-up to his top division promotion he increased his weight by 100kg to 140kg, giving him a more powerful attack, but he is still able to outmaneuver his opponents by his speed and footwork. 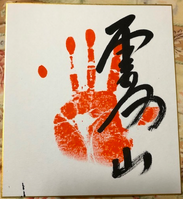 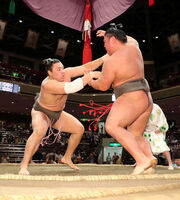 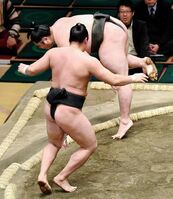 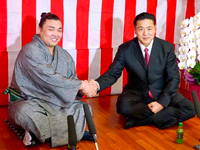 Kiribayama after promotion to Juryo (c. 2019) 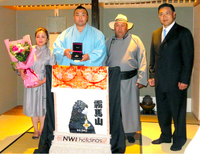 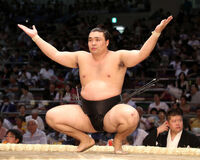 Kiribayama after promotion to Makuuchi (c. 2019) 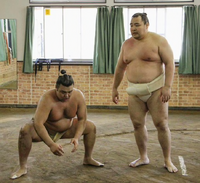 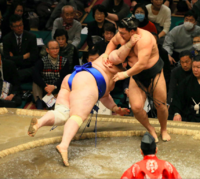 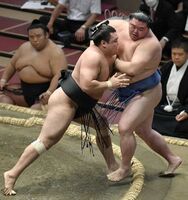 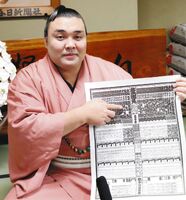 Kiribayama after promotion to Komusubi (c. 2021) 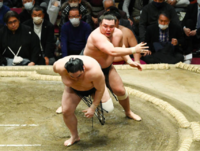