Kokkai Futoshi - 黒海 太 (born March 10th, 1981) is a former Georgian professional sumo wrestler from Tbilissi. He made his debut in May 2001 and last wrestled for Oitekaze stable. He reached the makuuchi division in January 2004 and has two special prizes as well as two kinboshi. His highest rank was komusubi and he retired in September 2012.

Kokkai was born as Levan Tsaguria in Sukhumi, Abkhaz Autonomous Republic in then-Soviet Georgia. The secessionist war in Abkhazia forced his family to move to Tbilisi, capital of Georgia, in 1992. He started amateur wrestling from the age of six, being taught by his father who represented the Soviet Union in the sport. Levan enrolled in the National Academy of Sports of Georgia and quickly got interested in sumo, taking part in the World Amateur Sumo Championships in Riesa, Germany. In January 2001, he arrived in Tokyo, Japan, and joined a local sumo school.

He made his professional debut in May 2001, joining Oitekaze stable. His stablemaster, former maegashira Daishoyama, gave him the shikona, or ring name, of Kokkai, named after the word for Black Sea in Japanese. He quickly rose through the lower divisions, winning the jonidan and sandanme championships with perfect 7–0 records. Another tournament title in the makushita division in January 2003 followed by a 5–2 score at Makushita 1 saw him reach elite sekitori status in May 2003.

Kokkai produced an 8-7 record in his juryo debut and followed it with two 9-6 records. After winning the juryo division championship with a 14–1 record in November 2003 he was promoted to the top makuuchi division in January 2004, just 16 tournaments after his debut.

Kokkai steadily climbed the maegashira ranks, reaching the #1 position in November 2004 before slipping back slightly. One of his best performances came in July 2005 when he defeated yokozuna Asashoryu for the first time, scored nine wins and was awarded the Fighting Spirit prize. He made his san'yaku debut in September 2006 at komusubi rank and held it with a solid 8–7 record, but he fell back to the maegashira ranks after a back injury restricted him to a poor 3–12 mark in November.

In March 2007 he turned in an impressive 10–5 score but he struggled again in May 2007, only managing three wins at the rank of maegashira 2. After another losing score in July of that year he fell to maegashira 12 in September, his lowest-ever top-division rank. He managed nine wins in November 2007, his first kachi-koshi, or winning score, since March.

After a solid 9–6 performance in January 2008, in the following tournament he produced his best-ever top-division result, a 12–3 score from the rank of maegashira 5, which earned him joint runner-up honours and his second Fighting Spirit prize. However, in the May 2008 tournament he could only manage three wins from the maegashira 1 ranking. Demoted to maegashira 10 for July, he struggled again, winning only five bouts. He was disqualified from his final match against Kimurayama after his was judged to have pulled his opponent's topknot, which is a kinjite, or foul. Kokkai maintained it was accidental as the tape on his fingers had stuck to Kimurayama's hair. He continued to move up and down the maegashira rankings in 2009, alternating between 8–7 and 5–10 records.

Having not missed a bout since his debut, in July 2010 he fought his 600th consecutive top-division match. Troubled by an elbow injury, he lost his top division status after the January 2011 tournament when he could only score 3–12 at maegashira 15, ending a run of 43 consecutive tournaments ranked in makuuchi. Back in juryo for the May Technical Examination Tournament, he struggled to a 5–10 score. He returned to the top division in September 2011, but his stay was short-lived after a disastrous 1–14 performance in November. He was forced to pull out of the May 2012 tournament with an injury sustained in a defeat to Takanoyama on Day 10, breaking a run of 882 consecutive appearances since his professional debut in 2001, the most amongst active wrestlers. He was, however, able to return to the tournament and secured his majority of wins on the final day.

During the September 2012 tournament, Kokkai's stablemaster announced that his retirement due to multiple injuries to his body over his sumo career, and had not been training in a few months due to them. His danpatsu-shiki, or retirement ceremony, was held on February 2nd, 2013, at a hotel in Tokyo. Upon retirement he returned back to Georgia and currently owns a Japanese restaurant and works as a sumo coach. In April 2018 he was voted by unanimous decision to be the president of the Georgian Sumo Federation for a term of four years.

In the January 2011 tournament, Kokkai went out drinking with fellow Georgian wrestler Gagamaru and the pair allegedly got into a fight at an Indian restaurant in Tokyo's Sumida ward, causing damage to the property. They broke the glass door which separated the kitchen and the restaurant and they left big hole in the ceiling. Kokkai said that he was trying to comfort Gagamaru who was depressed about the loss of his father. However Kokkai accidentally hit Gagamaru's hand with his glass and he immediately stood up and took offense to that. Both were reprimanded by the Sumo Association for staying out late during a tournament and causing damage. The wrestlers reached a settlement with the restaurant.

He has knowledge of four languages: Georgian, Russian, English and Japanese.

He is a devout Christian and prays every day.

He would sometimes choose not to shave during a tournament for superstitious reasons and would therefore build up stubble, unusual for sumo wrestlers who are normally clean-shaven. In a recent tournament he also appeared with prominent sideburns for a few days, before he was told by his stablemaster to shave them off.

Kokkai's younger brother George also became a professional sumo wrestler in September 2005 under the name Tsukasaumi, but quit after just a year because of persistent injuries, returning to Georgia to take over the family business.

Kokkai was married to a 22-year-old from his native Georgia in August 2011.

Due to a neck injury, Kokkai was forced to change his sumo style. He began to fight more on the mawashi, gripping his opponent's belt, switching from the pushing and thrusting techniques he used earlier in his career. His profile at the Japan Sumo Association still lists tsuki/oshi as his favored techniques, and his most common winning kimarite was oshidashi, or push-out, followed by yorikiri, or force-out. He was also fond of using the slap-down (hatakikomi) and the pull-down (hikiotoshi). 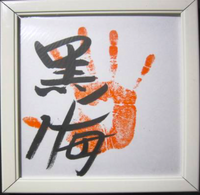 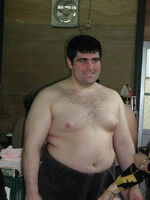 Kokkai becomes the first European in 12 years to join sumo 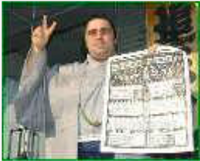 Kokkai after promotion to Makuuchi (c. 2004) 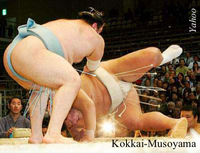 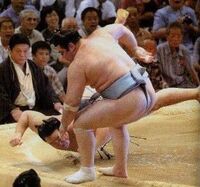 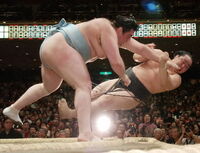 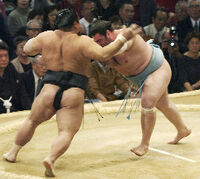 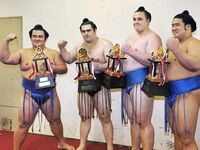 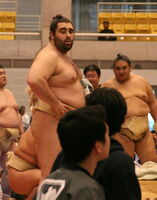 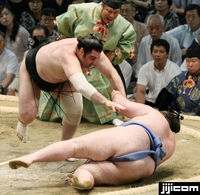 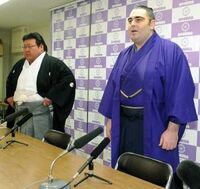 Kokkai after retirement with his fellow Georgian rikishi
Add a photo to this gallery
Retrieved from "https://sumowrestling.fandom.com/wiki/Kokkai_Futoshi?oldid=12966"
Community content is available under CC-BY-SA unless otherwise noted.