Technique (5)
Mainoumi Shuhei - 舞の海 秀平 (born February 17, 1968) is a former Japanese professional sumo wrestler from Ajigasawa, Aomori. He made his debut in May 1990 and last wrestled for Dewanoumi stable. He reached the makuuchi division in September 1991 and has five special prizes. His highest rank was komusubi and he retired in November 1999.

Born in Ajigasawa, Nagao was an amateur sumo champion at Nihon University, where he studied economics. He originally wanted to be a teacher, but decided to join professional sumo in honour of a close friend who died before he could achieve his own ambition of being a sumo champion.

Nagao initially failed the Sumo Association's physical entrance exam, because he was too short to meet their height requirement, which at that time was 173 cm. He got around this by persuading a doctor to inject silicone into his scalp, giving him the necessary couple of centimetres. To prevent any future hopefuls from having to go through this painful procedure, the Sumo Association changed its rules to allow special dispensation for amateur champions who do not meet the height requirements.

Nagao was granted makushita tsukedashi status due to his amateur accomplishments and he started at the bottom of the makushita division. In his very first tournament, he produced a strong 6-1 record and participated in an eight-man playoff for the yusho, but missed lost in the second round to Hayashi. He was promoted to juryo in March 1991 after four tournaments in makushita.

On his debut in the top makuuchi division in September 1991 he scored eight wins and was awarded the Gino-sho or Technique Prize, the first of five he was to win during his career. Mainoumi said his ambition in the top division was to reach a san'yaku rank at least once, and this he achieved in September 1994 when he was promoted to komusubi. In July 1996 he broke his leg when the 275 kg Konishiki fell on it during a bout that Mainoumi won. He was forced to sit out the rest of that tournament and all of the next, dropping to the juryo division. He returned to the top division in May 1997 but since his injury he had lost some of his speed and he was finding it more difficult to hold his own. In March 1998 he fell back to juryo once again, where he remained until his retirement from sumo in November 1999.

Mainoumi chose not to stay in sumo as a coach after retiring from the ring, a decision that caused some disquiet in the Sumo Association at a time when the sport's popularity was at a low ebb.Instead he launched a new career as a television personality. He can still be heard commentating on NHK's sumo broadcasts. He has turned down many offers from political parties to run as their candidate. He appeared in 2005 Hollywood film Memoirs of a Geisha as a sumo wrestler, credited as Shuhei Nagao, his real name. He has also worked at Sakaigawa stable (run by his ex-stablemate Ryogoku) as an assistant instructor. In 2015 he published a book entitled, "Why Can't Japanese Become Yokozuna?" in which he argued that because of their rich lifestyle Japanese youth lacked the "hungry spirit" of Mongolian wrestlers who had come to dominate the top ranks.

Mainoumi was married in May 1997, to a nightclub manager with two children from a previous marriage.

Mainoumi had such an extensive knowledge of sumo techniques that he was nicknamed Waza no Depaato, or the Department Store of Techniques. He used up to 33 different kimarite during his career. In November 1991 he famously defeated the 204 cm, 200 kg wrestler Akebono by mitokorozeme, a "triple attack force out", which involves simultaneously tripping one leg, grabbing the other, and pushing with the head into the opponent's chest to force him down backwards. Despite appearing to most observers to be mitokorozeme, the win was actually given as uchigake by officials. Mainoumi subsequently won two further bouts that were officially determined as mitokorozeme, against Kotofuji in September 1992 and Tomoefuji in January 1993. He was the only sekitorito have used this technique from the beginning of the Heisei era until November 2019, when it was successfully used by Ishiura. Mainoumi also had a very unusual tachi-ai, and sometimes used the tactic of nekodamashi, of clapping of the hands in front of the opponent's face to distract him at the initial charge. Another tactic was the "Hasso tobi," or "eight-boat leap," which involved a sidestep at the tachi-ai that would see him leave the ground and reappear directly behind his opponent, as happened to Kitakachidoki in January 1992. 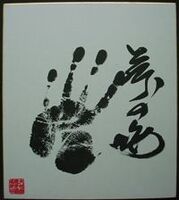 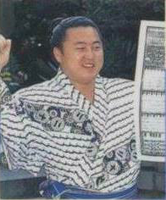 Mainoumi after promotion to Makuuchi (c. 1991) 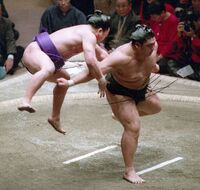 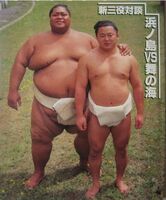 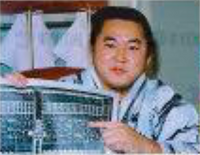 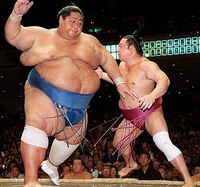 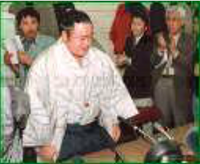 Mainoumi after retirement as an NHK commentator
Community content is available under CC-BY-SA unless otherwise noted.
Advertisement