(1) Juryo
(2) Makushita
(1) Jonidan
Shohozan Yuya - 松鳳山 裕也 (born February 9, 1984) is a Japanese professional sumo wrestler from Chikujo, Fukuoka. He made his debut in March 2006 and currently wrestles for Hanaregoma stable. He reached the makuuchi division in November 2011 and has four special prizes as well as five kinboshi. His highest rank as of 2022 is komusubi.

Matsutani first practiced swimming and karate in kindergarten before starting sumo in elementary school. He took a break from sumo during his time at Shiida Junior High School and instead was a member of the baseball club. When he got too big for the baseball club he switched to judo.

He later attended an industrial and science high school in nearby Oita Prefecture he joined the sumo club after being scouted by the coach at the school. In his second and third years he participated in two annual regional tournaments. In these tournaments, he managed to reach the best eight, but was beaten both times by future ozeki Kotoshogiku. He later enrolled at the Department of Buddhism at Komazawa University. In Komazawa University, he was a regular on the sumo team and managed to be runner up for the championship at a national competition.

His successes at this level garnered him many invitations from various sumo stables but chose to enter Matsugane, the stable that first approached him (it has since changed its name to Hanaregoma). He entered the professional ring in May 2006, fighting under his own surname of Matsutani. He was not able to achieve makushita tsukedashi status as he had never managed to win a national tournament before turning pro.

He posted a decent jonokuchi debut with a 5–2 record. In the next tournament, he took the jonidan championship with a perfect 7–0 record and a playoff victory over fellow up-and-comer Sakaizawa. Three strong tournaments in sandanme got him promotion to the third makushita division in March, 2007.

He had had a very strong showing up to this point, and had claimed he wanted to make makushita before the time for his hair to be tied up in a topknot came. He did achieve this goal, and though he started out strong with two consecutive 6-1 tournaments, as is often the case with wrestlers trying to advance through makushita, this is where he began to have trouble. He would struggle in the division for exactly three years. He began to find his stride in July, 2009. He achieved a 6–1 record and had a playoff bout against the future Akiseyama, which he lost. His sumo would grow more consistent from this point and after four more tournaments in makushita in which he had only one losing tournament, he finally qualified for the second tier juryo division for the May 2010 tournament. He was only the second wrestler in thirty-three years from Komazawa University to achieve promotion to juryo.

In his sekitori debut he won 9 of 15 bouts and was promoted to juryo #8 for the following tournament, but only managed a 6–9 record.

His losing tournament would be the least of his concerns though. It was revealed on August 12, 2010 in a follow up to the June investigation into baseball gambling, that Matsutani, along with a sandanme wrestler from his stable had also been involved in gambling, but had not come forward, and had participated in the July, 2010 tournament while other wrestlers who were implicated or who admitted involvement had been suspended. He, along with his stablemate and his coach, apologized to the public in a press conference soon after. In September, the Japan Sumo Association handed down the decision not to dismiss the wrestlers, but to suspend them for two tournaments (September and November).

On his November 2011 tournament top tier makuuchi debut, he adopted the shikona Shohozan and achieved a 10–5 record. He reached what was at that time a career high of maegashira 1 in the September tournament of 2012. He had his best tournament to date in the following tournament in November, scoring ten wins and defeating three ozeki. This earned him his first special prize, for Fighting Spirit. He was promoted to komusubi for the January 2013 tournament, becoming the first man from Matsugane stable to reach the san'yaku ranks since its establishment in 1990. He has since been re-promoted to komusubi three times, though he has never held the rank for more than one tournament. He won his second Fighting Spirit prize in September 2013, and also earned his first kinboshi for an upset of a yokozuna while ranked as a maegashira, defeating Harumafuji.

After a disastrous 1–14 performance in the March 2015 tournament, he was demoted to juryo, and was unable to get a winning record in the next tournament to return immediately to the top division. In September however he won the division with a 13–2 record and was promoted back to the top division for the next tournament. In November he produced his best performance in the top division, winning twelve matches and finishing in a three-way tie for second place: only a defeat by Aminishiki on the final day prevented him from reaching a play-off for the championship. His efforts saw him being awarded his third Fighting Spirit award.

In January 2016 he defeated Harumafuji again to win his second kinboshi, but he otherwise had a relatively quiet year, and was not able to put together enough consistent performances to earn promotion back to san'yaku. In the January 2017 tournament he earned his third kinboshi, once again beating Harumafuji, and he got his fourth in March, but he remained in the maegashira ranks for the rest of the year. In May 2018 he won the Outstanding Performance prize for being the only wrestler to defeat the tournament winner, Kakuryu. This performance was rewarded with promotion to komusubi for the first time since 2014, but he lasted only one tournament at the rank with a 3–12 record. He was demoted to juryo after the September 2020 tournament, by which time he was the oldest man in the top division, but he decided to continue wrestling. He earned promotion back to makuuchi for the November 2021 tournament in Fukuoka Prefecture at the age of 37 years and 8 months, making him the ninth oldest wrestler to do so. He was the only wrestler from Fukuoka in the top division at that time.

It was revealed on August 12, 2010 in a follow up to the June investigation into baseball gambling, that Shohozan, along with a sandanme wrestler from his stable had also been involved in gambling, but had not come forward, and had participated in the July, 2010 tournament while other wrestlers who were implicated or who admitted involvement had been suspended. He, along with his stablemate and his coach, apologized to the public in a press conference soon after. In September, the Japan Sumo Association handed down the decision not to dismiss the wrestlers, but to suspend them for two tournaments (September and November).

He had become known for having a very stern, almost scary visage, but in his juryo entry interview people were surprised to learn he had a very expressive smiling face and a friendly way of talking. He even admitted to being sensitive enough to cry when he first heard of his juryo entry. He is also known for his darker skin tone and when yokozuna Asashoryu approached him to ask where he was from, Shohozan replied that he was from Kyushu, which surprised Asashoryu.

Shohozan is married, with his first son born in 2014. He also has another younger son.

Shohozan's hobbies are billiards (pool) and biking. His favorite food is fried rice and hot pot. He dislikes celery. Shohozan also does not drink alcohol and when he goes to restaurants, he prefers to drink a large cup of oolong tea.

Shohozan is known for his muscular body and in 2013 had the second lowest body fat percentage of makuuchi wrestlers at 24%.

Shohozan specialises in pushing and thrusting techniques, or oshi-sumo. His most common winning kimarite is oshidashi, or push out, followed by yorikiri or force out. 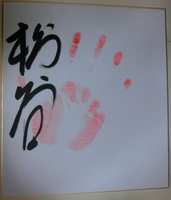 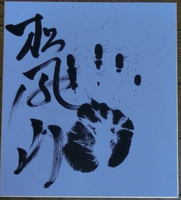 Matsutani after promotion to Juryo (c. 2010) 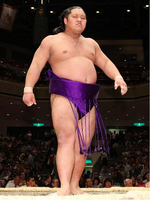 Shohozan after promotion to Makuuchi (c. 2011) 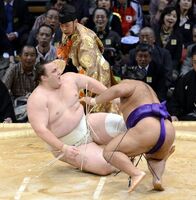 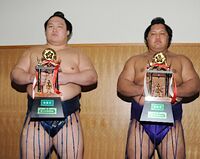 Shohozan with his first of many sansho prizes (c. 2012) 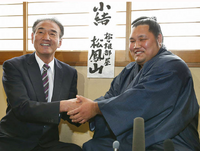 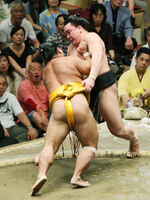 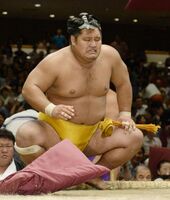 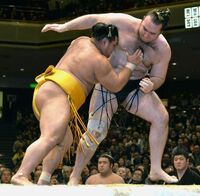 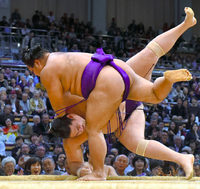 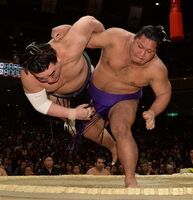 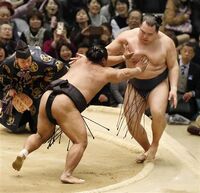 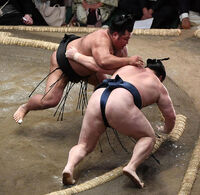 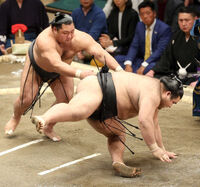 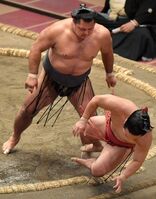 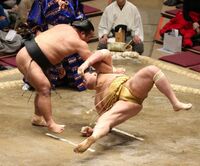