(1) Juryo
(2) Sandanme
(1) Jonidan
(1) Jonokuchi
Ura Kazuki - 宇良 和輝 (born June 22, 1992) is a Japanese professional sumo wrestler from Neyagawa, Osaka. He made his debut in March 2015 and currently wrestles for Kise stable. He reached the makuuchi division in March 2017 and has one special prize as well as one kinboshi. His highest rank as of 2022 is maegashira 1.

Ura was born on June 22, 1992, in Neyagawa, Osaka. He began practicing sumo at the age of four due to the influence of his older sister who also participated in sumo. Although Ura practiced tremendously hard, he had trouble winning due to his small stature.

In addition to sumo wrestling, he also participated in greco-roman wrestling. This helped him increase his balance while staying low. Ura excelled in wrestling and was once even ranked second nationally.

When Ura entered high school at Toba High School, there was no wrestling club, so he decided to devote more time into sumo wrestling. However, he was an extreme lightweight and struggled to produce any meaningful results. He later enrolled at Kwansei Gakuin University where he majored in education. He would participate in national tournaments for wrestlers under 65 kg. He later increased his weight to 80 kg and he competed in sumo at the 2013 World Combat Games at Saint Petersburg, Russia, winning a gold medal in the lightweight division. After graduation, he obtained a teacher's license, but had the intention of joining professional sumo.

In February 2015, he announced his intention to enter the Kise stable as a professional sumo wrestler, and after his first bouts in March, made his tournament debut in the May basho, winning the jonokuchi division. He again performed well in the July tournament, posting a 7–0 record and losing a playoff for the jonidan division championship. After going 5–2 in the sandamne division in September, he finished the year with a 7–0 record as a makushita debutante, again losing a division championship playoff in November.

Ura began 2016 with a 6–1 record and another makushita playoff loss in January. Also going 6–1 in March, he was promoted to juryo for the next tournament. In recognition of becoming the first among their alumni to achieve sekitori (the two highest divisions in sumo) rank, he was given a kesho-mawashi by Kwansei Gakuin University.

He finished the May tournament 10–5 and with a 11–4 finish in the July tournament, he entered the September event as the top-ranked juryo, but he went 6–9, his first losing record, having fractured a bone in his left wrist that required post-tournament surgery. On his return, he posted a 8–7 record in the November tournament. His overall 11–4 record in the January 2017 tournament led to his promotion to the top makuuchi division and a rank of maegashira 12.

In March 2017, before a home crowd in Osaka, he achieved a winning record (kachi-koshi) of 8–7, and entered the May 2017 tournament at maegashira 10. There he scored eleven wins against four losses in this tournament, but did not receive a special prize for his efforts, despite speculation that he would win the Technique Award. Former yokozuna Kitanofuji, commentating for NHK, expressed his surprise at the omission. Still, his performance earned him a career-high ranking of maegashira 4 for the July 2017 tournament. There he got off to a 5–1 start, but then injuries among those ranked above him shifted him to a more challenging schedule, facing the san'yaku, the foremost wrestlers, for the first time. Though he defeated Harumafuji on Day 9 to earn his first kinboshi or gold star for a win over a yokozuna, he injured his knee in a defeat to ozeki Takayasu on the following day, and he lost four of his remaining five matches to finish with a make-koshi 7–8 record.

Ura withdrew from the summer regional tour that followed the July 2017 tournament, citing damaged right knee ligaments, and indicated he would need a month's rest to recover. He returned for the September tournament, but exacerbated his injury on the second day and was forced to withdraw, with reports indicating a right knee anterior cruciate ligament injury and a left knee meniscus injury that would require surgery. With the subsequent extended rehabilitation, he only returned to the competition a year later at the September 2018 contest, having dropped three divisions in the rankings to near the bottom of sandanme. In this tournament he went 6–1 to stop his slide, and followed that with an undefeated 7–0 record and sandamne division championship in the November 2018 tournament. This returned him to makushita for the January 2019 contest, but he re-injured his right-knee ligament on day 10 and withdrew from the remainder of the tournament.

He underwent surgery again in late February 2019, requiring another extended recovery period, from which he only returned the following November, having dropped to the bottom of jonidan, his lowest rank since his debut tournament. He achieved a 6–1 record in this first tournament back, and in the following tournament in January 2020, from the rank of jonidan 28, an undefeated 7–0 record and a playoff victory earned Ura the division championship. Fighting at the rank of sandanme 30 at the March tournament, Ura won his second straight division championship with another perfect 7–0 record and a playoff win. This result earned him a return to makushita for the July tournament (the May tournament having been cancelled due to the COVID-19 pandemic), and he extended his winning streak to 18 matches before finishing at 6–1 and earning a spot in the upper ranks of makushita, where another 6–1 in September elevated him back to juryo after 15 tournaments in lower divisions.

He is only the second former top division wrestler after Terunofuji to fall as far as jonidan and make a return to juryo, earning 9–6 and 10–5 records on his first two tournaments back in November 2020 and January 2021, respectively. In the March 2021 tournament he reached 6–2 on Day 8 after a win over another fan favorite, Enho, a highly-anticipated first match between the two in professional sumo, but a minor injury Ura suffered in the contest forced his withdrawal from the 9th day of the tournament, before returning to gain 4 additional wins to end with a 10-4-1 record. Ura won the juryo championship in May 2021 with a 12–3 record, ensuring his return to makuuchi after 21 tournaments away. He now holds the record for the lowest rank reached before a successful makuuchi return (jonidan 106 West).

Ura began the July 2021 tournament ranked at maegashira 13, and after a 10–5 record rose to maegashira 6 for September. In a tournament that included a pairing that matched him against fellow top division returnee and newly-promoted yokozuna Terunofuji, he finished 7-8. He then opened the November tournament one rank lower at maegashira 7. In this tournament he produced a 10–5 record and won his first special prize, for Technique,and as a consequence surpassing his pre-injury highest rank, opening the January 2022 tournament at maegashira 2 and again achieving a winning record of 8–7. Ura started strong in the May 2022 tournament, but withdrew on day 14 ending the may basho with 9-5-1 record.

The Kwansei Gakuin University's sumo club was founded 125 years ago and was the first wrestler from the school to turn professional.

Ura is known for his trademark pink mawashi, which was criticized by many sumo conservatives.

Ura's favorite food is spam musubi and eggs. He dislikes sweet food. His hobby is listening to rap.

He is predominantly a pusher, also a technician, but the unpredictability of his improvisational style that responds to opponents' moves has made him popular. Ura has been called "agile as a gymnast" and his bouts acrobatic. His favourite techniques as listed in his Japan Sumo Association profile include oshi pushing/thrusting techniques as well as the rare ashitori (leg grab), and he has also drawn notice for performing other rare winning techniques. In the May 2016 tournament, he won a juryo bout by koshinage, a hip throw. He employed another rare winning technique at the January 2017 tournament, tasukizori (reverse backward body drop), against fellow juryo wrestler, Amakaze, its first instance in sumo's upper divisions since 1955 when winning techniques were first announced. In the November 2020 tournament he deployed two unusual techniques. On the fifth day he used izori to defeat Kyokushuho, the first time the move had been seen at sekitori level since Tomonohana used it against Hananokuni in September 1993. Tomonohana (now Tamagaki Oyakata) was at the ringside in his role as a judge to see Ura's win. On the fourteenth day of the same tournament Ura defeated Azumaryu with the extremely rare ushiromotare, or "backward lean out," which brought cheers from the crowd when the technique was announced.

When he first entered the professional ranks Ura's weight was listed as 113 kg (249 lb), but by May 2017 he had bulked up to 137 kg (302 lb), heavier than some other sekitori such as Ishiura and Terutsuyoshi. His bucking of tradition by choosing a deep pink mawashi over the traditional brown or black angered some sumo elders. 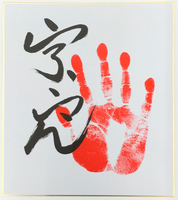 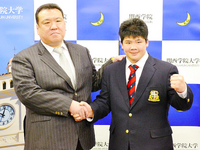 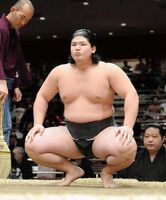 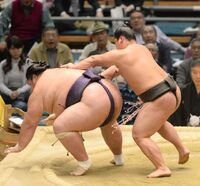 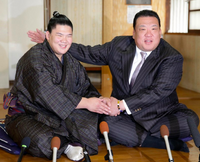 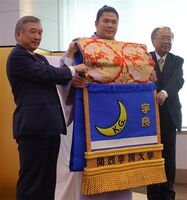 Ura gets presented with his kesho-mawashi (c. 2016) 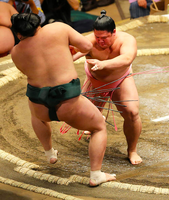 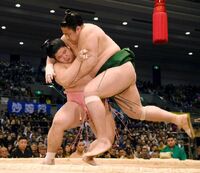 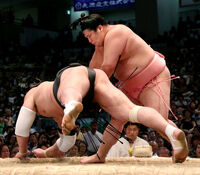 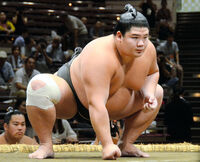 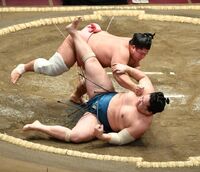 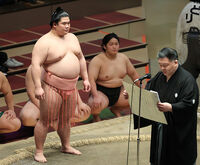 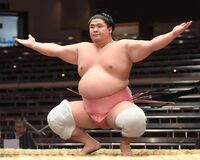 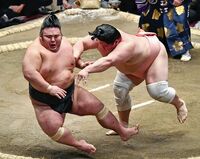